Forests are natural, wild places. Trees burn, blow down, mature, and regenerate on their own.

At the same time, forests have fingerprints of Homo sapiens all over them. If you know how to look, a stroll through Frick Park’s shady paths can highlight just how human actions have molded one very visible part of the park forests: the trees. 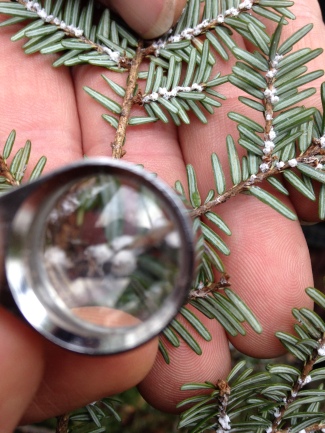 You could scour Frick Park and never come across white pine (Pinus strobus) or our state tree, the eastern hemlock (Tsuga canadensis). Until the 19th century both species were common throughout the state, but as the region industrialized, lumber companies prized these trees for their uses in tanning and construction and they disappeared from much of their former ranges. The result? The number of places in Pennsylvania where massive old-growth stands of white pine persist can be counted on your two hands. Afterwards, when forests began to regenerate, conditions did not always favor the return of these former giants.

If you do see a white pine or eastern hemlock in Frick (and there are a few of each), it was likely planted relatively recently by Parks Conservancy staff and volunteers. Much like logging these species, reforesting requires human labor.

Though white pine and eastern hemlock have fared poorly in our forests over the last 200 years, the forests that regenerated after logging actually benefited other trees. Black cherry (Prunus serotina) is one of these. North of Pittsburgh, in the Allegheny Plateau, it is estimated that black cherry trees made up less than 1% of the pre-logging forest. After extensive clear-cutting in the late 19th century, however, black cherry became a common part of the new forest that regrew there thanks to preference for sunny conditions and fast growth.

The same is true in Frick Park. Easily identifiable by their dark bark that looks like burnt potato chips or corn flakes, black cherries are common these days. You can find a large number of them where there once was a country club (now in the area where Riverview and Bench trails run). After the club’s annexation to Frick in the 1920s, forests regrew on these lands with black cherries. Some of these trees are actually now dying, as the species’ mortality typically increases after 80-100 years. 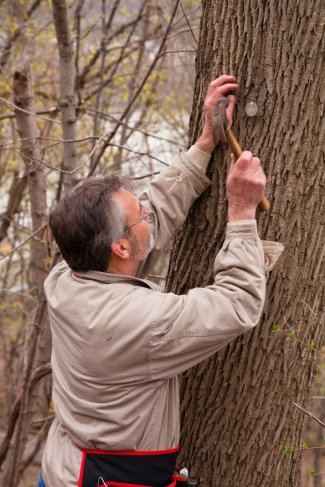 Dead trees can also illustrate how humans have shaped our forests. Since 2007 when it was first detected in Pennsylvania, emerald ash borer (EAB), a tiny green invasive insect, has left a path of destruction across Allegheny County, killing nearly all area ash trees (Fraxinus var.) in just a few years. The evidence is all over Frick Park, with standing and fallen dead ash trees exhibiting the tell-tale scars where EAB larva chewed through the trees’ energy-rich cambium, girdling them.

Globalization not only redistributes products, money, and people around the world, but also non-native plants, animals, and fungi, sometimes in ways that reshape our parks. EAB, for example, likely arrived in the U.S. in a shipping pallet from Asia. This pest, however, is not the first invasive species to change our forests. In the early 20th century, chestnut blight, a fungus accidentally introduced from Asia, killed virtually all American chestnut trees, a species then common throughout the eastern U.S.

Trees on the move (and we’re not talking Ents)

Frick Park’s forests will keep changing as a result of human influence. In addition to the risk of future invasive species, anthropogenic (human-induced) climate change promises big shifts for park trees. Just walk Rollercoaster Trail on the hills between Fern Hollow and Falls Ravine and look out on the sea of young sugar maples (Acer saccharum) that dominate the forest understory.

According to the U.S. Forest Service’s Climate Change Atlas, sugar maples will likely become significantly less important across Pennsylvania as the climate warms and stresses this species, eliminating it from the southerly parts of its range. More heat-tolerant trees may ultimately replace sugar maples in Frick Park and elsewhere in the state.

Learning from the past

Recognizing human fingerprints on our forests gives us opportunity to learn from the mistakes and successes of past generations. How can we leave fingerprints that will improve forest health? Parks are planned spaces, cared for by the people that use them. The team at the Pittsburgh Parks Conservancy is constantly on the watch for invasives like the Asian longhorned beetle and oak wilt and replanting diverse, resilient species of trees to create strong forests that will be around for generations to come.

Kevin C. Brown is an educator with the Parks Conservancy, and a researcher-writer of a National Park Service-funded history of the Devils Hole pupfish, an endangered desert fish that lives in Death Valley National Park. You can read more about his work here.